August isn't a time when Bees typically stray far from the Hive. As folks who follow our lifecycle know, it's usually a season of friends and fun in Machias, and one of the most abundant and beautiful times of the northern year.

But this summer brought a special request from some folks who love the northlands as much as we do: to come to Anchorage, Alaska and share the cautionary tale of Appalachian coal with folks in Cook Inlet, the Matanuska-Susitna Valley, and the magestic Kenai Peninsula, where proposed coal expansion threatens the lives and livelihoods of Alaskans and the salmon on whom they depend. 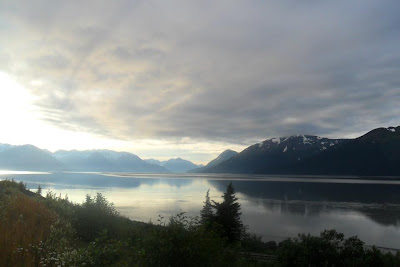 So a small swarm of us busted out our hats and mittens and headed north, hosted by the Matanuska Valley Coalition, to explore the terrain of Alaskan coal. (Read Molly's personal account of our trip and see more photos of us having extracurricular adventures here!)

Alaska deserves its reputation as a region of wild beauty, but violent colonization, reckless, sprawling "development" and a politics bought and paid for by extractive industries have made even this place vulnerable to environmental destruction on a massive scale.  Most folks have heard of the Exxon Valdez oil spill of 1989, at its time the largest environmental disaster in the history of the United States, while Sarah Palin's infamous rallying cry of "drill baby, drill" still ricoches in the echo chamber of public discourse around fossil fuel extraction. If Alaska's most famous export is salmon, its love affair with extraction is a close second.


So even here, in a place that calls itself the "Last Frontier," we found ourselves very much at the center of the "coal company town" politics depicted in the graphic, with governments in bed with extractive industries, native nations displaced, abused, and stripped of their sovereignty, and whole workforces and communities imported and conditioned to an extractive way of life.

Yet there's a glaring difference between, say, West Virginia coalfield politics as usual and what's happening with extractive industries in Alaska today: so far, the people of Alaska are benefiting.

Or rather, some Alaskans are sometimes buffered from the horrific health, economic, and environmental impacts of hosting extractive industries, thanks in part to Alaska's sheer girth. Because so much oil drilling, coal mining, and mineral extraction takes place in areas that are slightly physically removed from where the majority of the white voting public live, and because Alaskan residents receive a small stipend from the oil industry simply for calling the state home, so far the power of industry is perceived as mostly carrot and very little stick.

But with coal mining coming in force to the greater Anchorage area, that's all about to change.


As folks trying to halt coal development explained it to us, it's awfully hard to organize communities to fight powerful industries like Big Coal if they perceive the industry as beneficial to their way of life. It's especially hard in Alaska, where there is a widespread belief in the "myth of rigorous permitting," or faith in the ability of regulators to curtail corporate abuses and ensure that "the job is done right."Add in a rugged individualism and an emphasis on privacy, property, and personal autonomy, and suddenly activists must work overtime to build a culture of collective organizing from the ground up... sometimes (as one organizer explained it) starting by running between neighboring houses, communicating messages across dirt roads for neighbors who are reluctant to talk to even each other, let alone attend an organized meeting!

But communities who live on or near proposed mine sites are a different story. In Chickaloon, for instance, a small community about an hour and half's drive from Anchorage into the Matanuska Valley, neighbors have come together across wider gulfs than dirt roads to organize to keep coal out. Here, newer resident groups like the Castle Mountain Coalition are working alongside the Chickaloon Village of the Athabaskan Nation, indigenous folks whose roots in the area go back to time immemorial and who have fought coal since the first wave of mining in the area in the 1920s.

Alaskan organizers here have a powerful opportunity: to unite communities who will be heavily impacted by coal extraction BEFORE the extraction is too far gone. And since the new coal developments in Alaska will be directly polluting the air, water, and soil of the Matanuska Valley, where the vast majority of locally produced food is grown, folks in Anchorage (75% of the state's population) now have a direct connection to the threats of coal.

Further, communities across Alaska are bound together beyond different geography by the remarkable lifecycle of salmon, whose disruption for coal mining, processing, and transport will be catastrophic for subsistence and personal use fisheries as well as commercial operations. As one activist put it, "Here, no one argues about how valuable the salmon are. It's not just for environmentalists. What we disagree about is whether we trust the corporations and government agencies to adequately protect them." If lessons from Appalachia and the rest of the world are any indicator of what's to come, it's a far better bet put our faith in the salmon-protective power of organized communities. 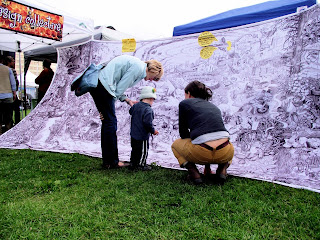 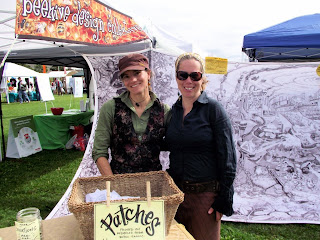 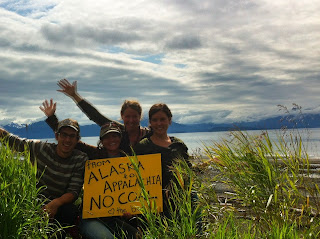 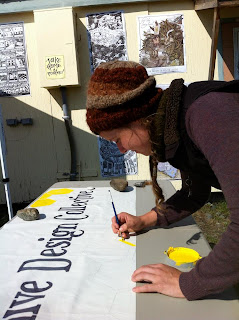 So... we hit the streets. And the festivals. And the community venues. We talked with folks who share our values around healthy land and healthy people with a do-it-yerself attitude, even if they might not have identified as opposed to strip mining if you'd asked them. That's how we do, after all... one conversation at time...

Folks are organizing an action camp to build skills and strategies for keeping Alaskan coal in the ground- help them spread the word!


Hoodwinked in the Hothouse?


Finally, everywhere we went in Alaska, we found folks who are experiencing the everyday impacts of climate change. After all, it's a lot harder to deny when you're surrounded by melting glaciers (as above) and wildly erratic weather patterns! Moreover, folks who depend on creatures like salmon to survive have seen dramatic changes in the patterns and availability of wild foods.

Though climate change is obviously a huge threat to all Alaskans, it's also an opportunity for rallying folks around deep system change rather than the false "solutions" and dangerous distractions paraded at events like the "Alaska Renewable Energy Fair" (sponsored by none other than BP, Shell, and Conoco Phillips!). 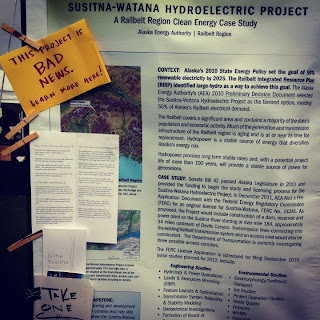 While we're all about ecological energy solutions, this event was celebrating (among other bad ideas) the Susitna Dam Project, which will be devastating for the Mat-Su Valley should it be constructed. As always, sorting out the good news from the greenwashing is tricky business, but there's one thing we know for sure- stopping coal development CAN'T mean devastating other ecosystems with oil & gas drilling, big hydro, nuclear, or other extractive energy extraction schemes. As folks in Appalachia have told us all along, we've gotta dig deep, look back, build power, and vision forward to create a future that's truly beyond a coal-dependent way of life.

Our hats off to Alaskans fighting the good fight!
Don't forget to check out Molly's Blog! >

T%hanks for posting this, it was a real worthwhile read